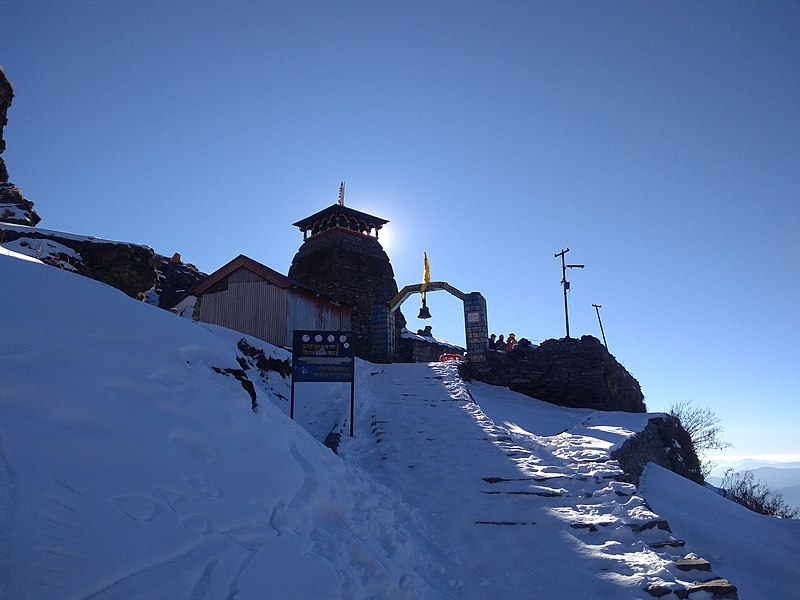 Also, this ancient Shiva temple is the highest Shiva temple located at the highest altitude in the world. Five ancient temples of Lord Shiva located in Uttarakhand, Kedarnath, Tungnath, Rudranath, Madhyamaheshwar and Kalpeshwar Mahadev, all these ancient temples of Lord Shiva are known as Panch Kedar. Among all the Panch Kedar temples, the Tungnath Mahadev Temple is placed Third.

According to mythology, all these ancient Shiva temples were built by the Pandavas after the war of Mahabharata. Before telling about the Mahabharata, I would like to tell you that the history of the Tungnath temple is not only related to the Mahabharata period, but the place is also directly related to Lord Rama and Ravana.

It is said that Lord Rama meditated on a place called Chandrashila, located a short distance from Tungnath. And at the time when the Lord resided at this place, Ravana also did penance at this place to please Lord Shiva. Now we come back once to the time of Mahabharata. After the end of the war of Mahabharata, the sage Vyas tells the Pandavas that – “During the battle of Kurukshetra, you five brothers killed their cousins and relatives, therefore you are guilty of fratricide and you have committed this sin only. And only Lord Shiva can forgive “.

The five Pandavas go out in search of Lord Shiva after obeying the sage Vyasa. But Lord Shiva is very angry because of the crime committed by the Pandavas in the battle of Kurukshetra. Due to this, Lord Shiva takes the form of an ox to escape the Pandavas and hides in a secret place in Kashi. But the Pandavas reach Kashi looking for Lord Shiva. After that Lord Shiva disappears in the form of a bull, and later five different parts appear.

According to mythological beliefs, after shifting from Kashi, the upper part of Lord Shiva appears in Kathmandu, the capital of Nepal. Presently the temple of Lord Shiva located in Kathmandu is called Pashupatinath. Apart from this temple, Lord Shiva’s back appears in Kedarnath, arms in Tungnath, mouth Rudranath, navel in Madhyamaheshwar and Hair in Kalpeshwar. For this reason, all these temples located in Uttarakhand are called Panchkedar.

After entering the temple, the idol of Lord Shiva’s vehicle river remains first. The Shiva lingam of Lord Shiva located in the sanctum sanctorum of the temple is made of black stone. Apart from this, the image of Lord Ganesha is engraved on the right side of the entrance of the temple. Statues made of Vyas Rishi, Kaal Bhairava and Ashta Metal have also been installed in the temple premises.

Apart from this, there is also a silver replica of the four Kedar temples in the temple and pictures of Pandavas are also engraved. The shikhara of the temple is decorated with big stone slabs.

Where the priests of other Kedar temples belong to South India. On the contrary, the priests of the Tungnath temple come from the local Brahmin family. The priest of the temple is a resident of Makku village located nearby. Due to excessive snowfall in the winter season, the shrines of the Tungnath temple are closed for six months. And the symbolic image of Lord Shiva is taken to Makumath, 29 km from Tungnath where Lord Shiva is worshipped for the next six months.

Located in the Rudraprayag district of Devbhoomi, Uttarakhand, Tungnath is 3470 meters (11385 ft) above sea level. Tungnath is situated at the highest elevation of Lord Shiva Panch Kedar temples located in Uttarakhand. Holy rivers like Mandakini and Alaknanda form the Tungnath mountain range.

Apart from these two rivers, the peak of Tungnath mountain is also considered to be the source of the three waterfalls flowing here, from which the Akashmani river is formed. Chandrashila is about a 1.5 km walk from Tungnath. (It is said that Lord Rama came to Chandrashila and meditated after killing Ravana.) The height of Chandrashila is only 3690 meters (12106 ft) above sea level.

From the summit of Chandrasila, unforgettable views of the major mountain ranges of the Himalayas such as Kedarnath, Bandarpunch, Nandadevi, Neelkanth, Chaukhamba and Panch Chuli etc. are visible. For Tungnath you begin your journey from the agricultural fields of Chopta and cross the alpine meadows to reach the summit of Tungnath, crossing the forests of Rhododendron, Coppice.

Garhwal University near Tungnath has also maintained a botanical station here. A rest house is also built at Dugalibitta near the summit of the temple for the comfort of tourists and devotees. There is also Kedarnath Wildlife Sanctuary near Tungnath which was established in 1972. Residents also call it the Kedarnath Kasturi Deer Sanctuary, as it has endangered musk deer.

The musk deer breeding centre is also built at Kharchula Khark near Chopta to save the musk deer and increase their population.

Most trekkers and tourists prefer Tungnath during the summer season. Because even in the summer season the daytime temperature in Tungnath is around 16 ° degree. The temperature of Tungnath drops to minus in the winter season. And there is a lot of snowfall in the winter season due to which it is very difficult to reach Tungnath on foot. Darshan in the Tungnath temple remains closed for 06 months due to heavy snowfall. 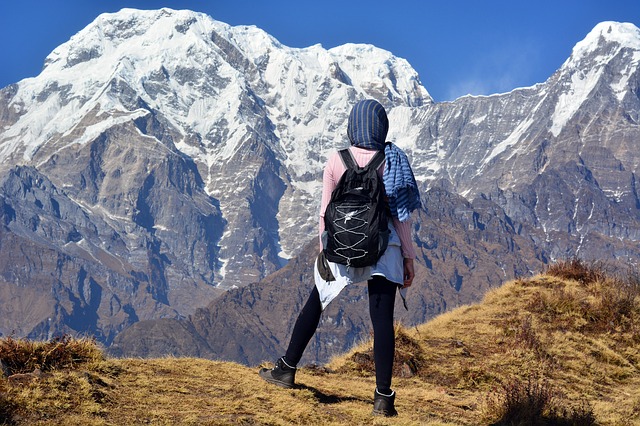 During the entire trek, there is a steep climb in some places and at some places a very flat route. During the Tungnath trek, you get to see very attractive Himalayas. Travellers having deep faith in Lord Shiva visit Tungnath Mahadev during the 170 km long Panch Kedar Yatra starting from Rishikesh.

The pilgrimage to Panch Kedar is undertaken in the summer season. The biggest reason for this is believed that one does not have snowfall in the mountains at this time and secondly, there is neither very cold nor hot summer here in the summer season. Panch Kedar Yatra can be started in April and can be done by October. Tungnath gets many feet of snow during the winter season, so the doors of the Tungnath temple remain closed for 06 months.

The Chandrashila trek is considered to be one of the easiest treks in the Himalayas. Almost all the travellers and pilgrims who come to see Tungnath from Chopta do a short trek to Chandrashila after seeing Tungnath. According to mythological beliefs, Chandrashila is also known as Ravana Shila.

A small temple is also built on the summit of Chandrashila trek which is known as Chandra Shila Temple. According to residents, Lord Rama killed Ravana in battle. Then, to get rid of the guilt of killing Brahmins, come to this place and do the harsh penance of Lord Shiva. So that Lord Shiva can free them from the sin of killing Brahmins. Click here for complete information about Chandrashila.

Although you can visit Tungnath at any time throughout the year, from November to April, the valleys of the Tungnath temple are closed due to excessive snowfall in winter. Tungnath temple is covered with 6-7 feet of snow during the winter season, due to which no devotees visit here during the winter season. If you are coming here to see Tungnath, then the time from the first week of May to the last week of October is considered to be the best.

Being situated at a very high altitude, there is very little option to eat both Chopta and Tungnath. But in Tungnath, finger mint made by the residents by filling wheat and mandua flour filled with lentils is very much liked by the tourists. Residents serve hemp sauce with this dish. Before eating cannabis sauce, you must keep in mind that it is very important to have the power to digest cannabis inside you. If you cannot digest cannabis, then you will get intoxicated.

There are many small hotels, resorts and camping sites around Tungnath. If you are planning to visit Tungnath, then you have to book a hotel, resort or camping site around Chopta. At Shrishti Lodge Hotel, Moksha Hotel, Gurukrupa Palace, Anshu Hotel, The Meadows Chopta Resort & Camp and Holiday Park Hotel, built around Tungnath, you can get your room or camp booked.

How to reach Tungnath

How to reach Tungnath by Air

How to reach Tungnath by train

How to reach Tungnath by road

You can reach Chopta by way of Rudraprayag and Ukhimath with the help of your vehicle, after that you can reach Tungnath by walking 3.5 kilometers. You have to come to Rudraprayag from Rishikesh on NH 58. After reaching Rudraprayag, you will have to take National Highway 109 which will take you to Ukhimath.

You can reach Rudraprayag and Ukhimath by the Uttarakhand transport buses running from Rishikesh and Dehradun and then you can reach Chopta with the help of taxis and cabs.

Nearby Places to Visit Tungnath

(If you have reached here in this article, then I have a small request from you to share your suggestions related to this article in the comment box below, and if you see any deficiency or any wrong information, then also definitely Tell me. I keep posting information related to travel on this website, if you like the information given by me, then you must subscribe to my website through your email, thank you).