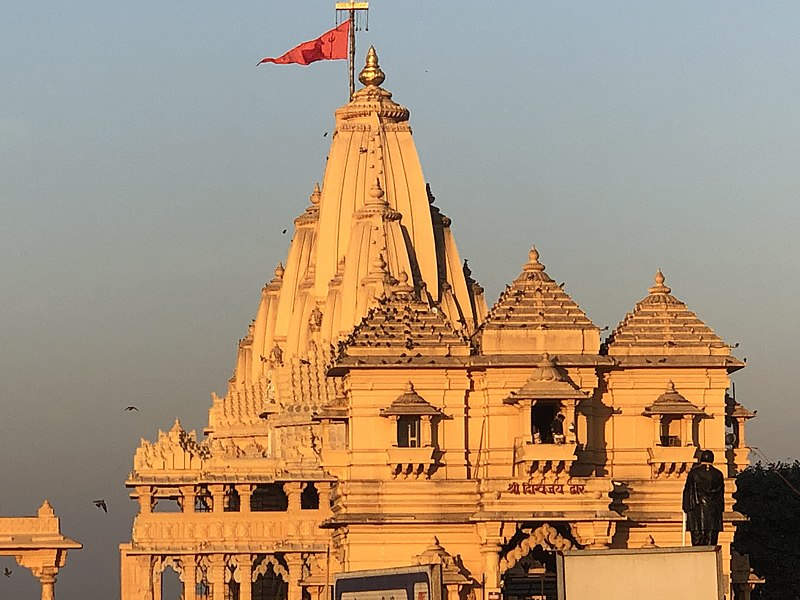 The Somnath Temple, revered as the first of the 12 Jyotirlingas of Lord Shiva, is a very ancient Shiva temple located near the port of Veraval in Saurashtra, Gujarat. Presently the place where this temple is situated is also known as Prabhas Patan.

According to ancient Hindu texts, the Somnath temple was built by Chandradev himself, besides this temple is mentioned in Rigveda, Skanda Purana, Bhagwat and Prabhas Khand. However, the present Somnath temple was built by Sardar Vallabhbhai Patel. And in the year 1955, the first President of our country, Dr Rajendra Prasad inaugurated this temple.

Before the year 1955, this temple was demolished many times by the Mughal invaders, yet this temple was rebuilt again and again by the Hindu kings. A light and sound show is run on the temple premises from 07:30 to 08:30 in the night to tell about the developments related to the history of Somnath temple.

Which, from the history of the temple to the folktales related to the temple, are told in a very beautiful way. Along with being the biggest centre of religious faith, a lot of religious and cultural work is also done in Somnath temple. This temple is very famous for the residents, especially for religious rituals like Shradh and Narayan Bali.

According to the Hindu calendar, the particular importance of performing religious work and Shradh work here in the months of Chaitra, Bhadrapada and Kartik have been told. Somnath temple is also the confluence of three holy rivers of the Hindu religion, Hiranya, Saraswati and Kapila, due to this many devotees from all over the country keep coming here to take bath in Triveni Sangam.

The Mythology of Somnath Temple

Enraged by this, Dakshaprajapati cursed the Chandrama that now your brightness will be diminishing every day. After getting the curse, gradually the light of the Chandrama starts decreasing every day and with it, the darkness starts increasing on the earth too.

As it was called, this place came to be worshipped as “Somnath”. It is believed that after receiving blessings from Lord Shiva, the Chandrama entered the Saraswati river flowing here to regain its lost lustre. Had a bath too.

02 – Another mythological story related to Lord Shri Krishna is also heard prominently here. It is believed that when Lord Krishna was resting at Bhaluka Tirtha. Then after some time, a hunter comes here and without thinking, mistaking the Padma symbol made in the sole of Lord Shri Krishna’s foot as the eye of a deer, shoots arrows.

It is said that when Hamir Singh Gohil’s head was separated from the body while fighting, his body kept fighting for a long time without his torso. Even today the statues of Hamir Singh Gohil and Bhil Sardar Vegda Ji have been installed near the Somnath temple.

The Somnath temple dedicated to Lord Shiva is the only temple in India that has been subjected to maximum Mughal and foreign invasions. Many historians believe that the Somnath temple was attacked and destroyed 17 times and this temple was rebuilt 7 times.

The last time construction work of this temple was started was in the year 1947 and was completed in the year 1951. So far no clear evidence has been found about when the Somnath temple was first constructed. But many ancient texts related to Hinduism like Rigveda, Skanda Purana, Bhagwat and Prabhas Khand etc.

have written about this temple and the Shivling established here. According to these ancient religious texts, the original Somnath temple was built at the time of Satyuga by Moon himself (Somdev) who built this temple out of gold. Apart from this, Ravana had also got this temple constructed with silver in Treta Yuga.

Later in the Dwapara Yuga, Lord Krishna built the Somnath temple with sandalwood wood. According to many historians, the work of reconstruction or restoration of Somnath temple was done by the Maitri kings of Vallabhi around 650 AD. About 75 years after this, in 725 AD, the Arab ruler of Sindh, Al Junaid, attacked the Somnath temple for the first time and looted it and took away all the property of the temple.

However, no clear evidence of this invasion has been found so far. About 90 years after this invasion, in the year 815 AD, the reconstruction work of this temple was done by the Gurjara Pratihar ruler Nagabhatta II. According to historical evidence and many historians, the Somnath temple was looted and destroyed by the Mughal invaders many times by attacking it.

Among all these invaders, the names Al Junaid, Mahmud Ghazni (1024), Afzal Khan, Allauddin Khilji (1296), Muzaffar Shah (1375), Mahmud Begda (1451) and Aurangzeb (1665) are prominently taken. Despite so many invasions, many Hindu kings got the Somnath temple rebuilt and renovated time and again.

First of all, Vikramaditya, the ruler of Ujjain, got the work of restoration of Somnath temple done about 2500 years ago. He was followed by the Raja of Valabhi (650 AD), Bhimdev of Anhilwara (11th century), Raja Khangara of Junagadh (1351 AD), Maharani Ahilyabai Holkar (18th century) and lastly after India became independent.

You get to see very fine and intricate carvings all around the temple. Thousands of beautiful sculptures of Hindu deities with very fine carvings are seen on the walls of the main temple. The Somnath temple is divided into three parts, which are known as Gribhagriha, Nrityamandapa and Sabha Mandap.

When you enter the temple, first comes the Nritya Mandap followed by the Sabha Mandap. At the rear of the temple is the Gribhagriha in which the ancient Shivling of Lord Shiva is situated. The Somnath temple is spread over an area of about 10 square kilometres and there are 42 ancient and new temples built in this entire circumference.

Deities of Mata Parvati, Maa Ganga, Mata Lakshmi, Mata Saraswati and Nandi have also been established in the Somnath temple complex. Apart from this, you also get to see a very beautiful temple of Ganesha on the temple premises. There is also a holy lake named Gaurikund near the temple, near which Shivling is also established.

There is a photo gallery near the main entrance of the temple, in which photographs related to the ruins, excavation, reconstruction and restoration of the temple are displayed. In the year 1782, Maharani Ahilyabai Holkar of Indore built a Shiva temple near Somnath temple, for which it is said that the original Shivling of Somnath temple is still installed in this temple.

Situated in the south direction of Somnath temple, Baan Stambh has always been the centre of attraction for the devotees visiting the temple. Although no clear information has been received about when the Baan Stambh was built, it is mentioned in the history books around the 6th century.

The Baan Stambh located in the Somnath temple is a guiding pillar with an arrow at the top which faces toward the sea. An inscription is also written on the Baan Stambh, which is inscribed in Sanskrit ( ‘आसमुद्रांत दक्षिण ध्रुव, पर्यंत अबाधित ज्योर्तिमार्ग‘ ).

In the revered Somnath temple as the first Jyotirlinga of Lord Shiva, all the festivals related to the Hindu religion are celebrated with great pomp and enthusiasm. But there are some festivals which are given more priority here. And the first of these festivals is the festival of Maha Shivratri.

At this time, all married and unmarried women perform a particular type of puja in the temple for the well-being of their families. At the time of Maha Shivratri, the distribution of prasad mainly made of thandai, cannabis, almonds and milk is done in the Somnath temple.

According to mythological texts, Lord Shiva killed a demon named Tripusar on the day of Kartik Purnima, which is why after Diwali, the festival of Kartik Purnima is also celebrated with great pomp in the Somnath temple.

Places to visit near Somnath Temple

Being a famous religious pilgrimage site, Somnath offers both Dharamshala and Hotel facilities for the pilgrims to stay. Apart from this, many online hotel booking websites also provide the facility of booking hotels in Somnath. You will find the phone numbers of many Dharamshalas built-in Somnath available on Google, you can call there and book a room for yourself in Dharamshala.

How to Reach Somnath

How to Reach Somnath by Air

The distance between Somnath from Rajkot airport is only 200 km. Apart from this, Sardar Vallabhbhai Patel Airport of Ahmedabad is also the nearest airport to Somnath temple. You can easily reach Somnath from Diu, Rajkot and Ahmedabad all these places by Bus, Taxi and Cab.

How to Reach Somnath by Train

How to Reach Somnath by Road

(If you have reached here in this article of mine, then there is a small request from you that you must share your suggestions related to this article in the comment box below, and also if you see any shortcomings or find any wrong information. Tell me. I keep posting travel-related information on my website, if you like the information given by me, then you must subscribe to my website through your email, thank you)

One Day Road Trip With Friends in Heavy Rain | Min