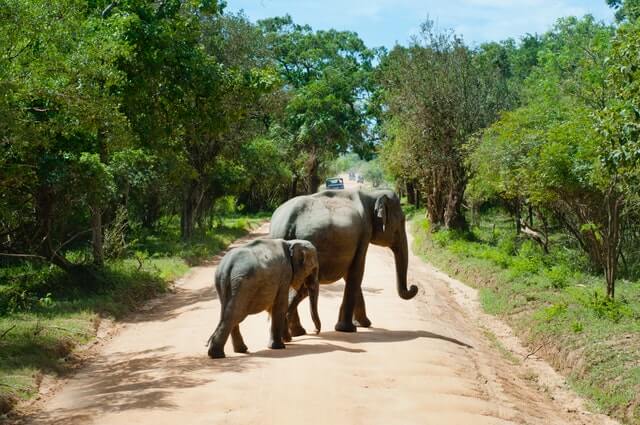 Rajaji National Park, located near the Shivalik mountain range of the Himalayas, is a major national park in India spread over 820 square kilometres, rich in wildlife and botanical wealth.  Rajaji National Park is spread over forest areas of three major districts of Uttarakhand, Dehradun, Pauri Garhwal and Haridwar.

Chakravarti Rajagopalachari was the second citizen of the country to be awarded the ‘Bharat Ratna’, and Sarvepalli Radhakrishnan was awarded India’s first ‘Bharat Ratna’.  Both these great personalities received this honour in 1954.

Rajaji National Park, located in Devbhoomi Uttarakhand, is a splendidly protected forest area spread over the plains of the Shivalik mountain range of the Himalayas.

Rajaji Tiger Reserve has 34 tigers and 5 cubs as per the 2015-16 tiger census, besides tigers, the elephant is the major attraction of this tiger reserve.  At present, the number of elephants in this sanctuary is more than 500, if you have good luck then you can see a herd of elephants here.

Apart from tigers and elephants, leopard is also the main predator of this tiger reserve, which has more than 200 leopards.  Visiting large herds of chital in this national park also provides a pleasant experience.  Rajaji National Park is a natural habitat for a wide variety of wildlife.

In the Rajaji National Park, which is full of mammals, in the same way, the dense forests here provide a favourable environment for birds.  More than 315 birds of native and foreign species are found in the national park.

Note: – Booking of jeeps and gypsies in the national park can be done at the main entrance of the park.  Booking depends on the availability of Gypsy and Jeep, try to get the Gypsy and Jeep booked in advance.  The admission fee can be waived if the students show the identity card of the educational institution.  Changes can be made at Rajaji National Park at any time by the administration of the park.

How to reach Rajaji National Park

How to reach Rajaji National Park By Flight

From Delhi, you will first get a good facility of rail, bus and cab to Haridwar, from Haridwar you can easily reach Rajaji National Park by cab or auto.

How to reach Rajaji National Park By Rail

How to reach Rajaji National Park By Road

Regular private bus services and government buses are available to reach Haridwar from cities like Delhi, Jaipur and Agra. You can reach Rajaji National Park very easily by your personal vehicle or even by cab.

(If you have reached here in my article, then you have a small request to share your suggestions related to this article in the comment box below, and if you see any deficiency or any wrong information, then also Tell me. I keep posting information related to travel on this website, if you like the information given by me, then you must subscribe to my website through your email, thank you.)