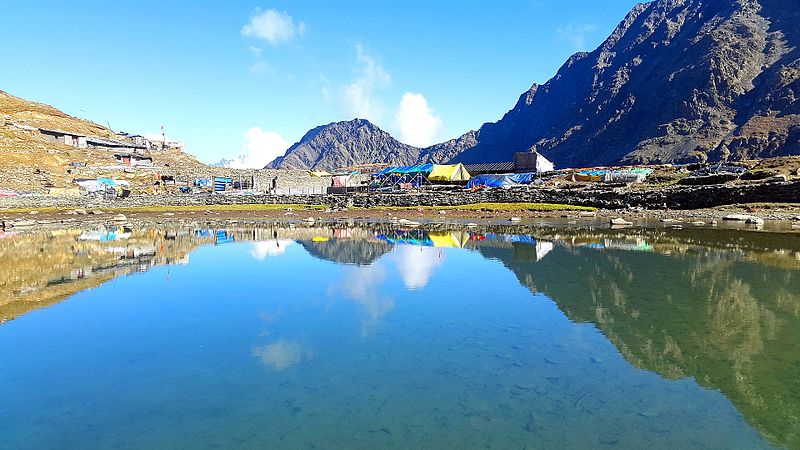 Residents believe that the small hill near the Mount Kailash is the remains of the herd and herd of sheep. Apart from the shepherd, a snake also attempted to climb Kailash Peak but it turned into a stone. Manimahesh Lake (4080 m / 13390 ft above sea level) is a major religious pilgrimage site located in the foothills of Kailash Peak (5653 m / 18547 ft above sea level) in Himachal Pradesh.

Numerous legends and mythologies associated with the construction of Manimahesh Lake located in the Pir Panjal mountain range of the Himalayas are heard by the residents, some of these mythologies are mentioned in many religious texts of Hindu religion. According to the most heard mythology here, Lord Shiva built Manimahesh after marriage to Goddess Parvati.

It is believed that due to Lord Shiva’s displeasure, there is an avalanche and heavy snowfall here. In mythology and many religious texts, Lord Shiva has also done penance for many years at this place. The people of the Gaddi tribe living here worship Lord Shiva as their deity. People residing in the Gaddi Valley are called Gaddis.

It is said that Lord Shiva gifted the chuhali hat (pointed hat) as a blessing to the people of the Gaddi tribe living near Manimahesh Kailash. This hat is worn by the people with their traditional attire Chola (coat), along with this they tie a Dora (a long black Rope with a length of 10-15 meters) to their waist.

The people of the Gaddi tribe call this holy land “Shiva Bhoomi” and call themselves devotees of Lord Shiva. According to legend, after Lord Shiva married Mata Parvati on the Mansarovar lake, he built Mount Kailash and became the parents of the entire universe. It is believed that Lord Shiva built Kailash Parvat in Himachal Pradesh as well and started using it as his place of residence.

According to the Hindu calendar every year, in the month of Bhadrapada (month of August to September), a very large fair is organized on the eighth day of Amavasya at Manimahesh lake and the fair is concluded on the last day of the festival on Janmashtami. This fair, which runs for seven consecutive days, is also called Manimahesh Yatra.

In this fair dedicated to Lord Shiva, thousands of millions of devotees from all over India come to bathe in this holy lake. ResidentsLocal residents consider Kailash Peak as the abode of Lord Shiva, a rock situated near this mountain is worshippedworshiped as Shivalinga. The ground just below Kailash Peak is called “Chaugan of Shiva”.

It is believed that Lord Shiva and Mother Parvati play in this ground, hence this field is called “Chaugan of Shiva”. The devotees who visit here during the Manimahesh Yatra, after bathing in the holy lake, circumambulate the holy lake thrice after worshippingworshiping the four-faced idol of Lord Shiva made of marble stone near the lake.

The first two kunds also come from Manimahesh Lake, which is known as Kamal Kund and Gauri Kund. A visit to Manimahesh Lake is considered incomplete without visiting the Bramhini Devi temple, located at a distance of 04 km from Bharmour. It is believed that the Manimahesh Yatra is not complete without taking a bath in Brahmani Devi Kund.

How to reach Manimahesh Lake

All passengers going through Bharmour can go to Hadsar by bus. After Hadsar, devotees and trekkers have to complete the journey to Manimahesh on foot. On the way from Hadsar to Manimahesh comes a place named Dhancho, at this place almost all the travellers rest during the night. If you have come with extra time during the Manimahesh Yatra then you can also go to see a beautiful waterfall located near Dhancho.

There are also two religious reservoirs named Gauri Kund and Shiv Krotri, one kilometre before Manimahesh Lake. According to the mythological belief associated with these two reservoirs, Lord Shiva and Goddess Parvati took bath in both these reservoirs in turn. The female traveller travelling to Manimahesh first takes a bath in Gauri Kund and the male traveller starts his journey by bathing in the Shiv Krotri reservoir.

To complete the journey up to Manimahesh Kailash, you will have to take at least 07 days in hand. If you start your journey from Delhi, then the route will be like this – you first reach Hadsar from Delhi via Dharamshala to Bharmour via your private vehicle or public transport – after that, you walk 13 kilometres from Hadsar to Dhanchow. Can reach Manimahesh.

While returning from Manimahesh, you can also reach Delhi by this route. If you are coming to Manimahesh from any other city in India, then you may have to add a few extra days to complete the Manimahesh Yatra.

On the second day of the journey, you reach Hadsar by vehicle from Dharamshala, and then walk 04 km from here to Dhancho. It can take you 03-04 hours to reach Dhancho from Hadsar, almost all the travellers and trekkers stay in Dhancho one night to acclimatise the body to high altitude. Dhancho’s height is 2280 meters (7480 ft) above sea level.

From Dhancho early in the morning, you can start your trek to Manimahesh. You have to keep in mind that the ascent of Manimahesh can be difficult and tiring as well. Upon reaching Manimahesh, you can spend the night in the camp built there. (Manimahesh is 4080 meters (13390 ft) above sea level.)

On the fourth day, you can start your journey from Manimahesh back to Dhancho. After reaching Dhancho, you have to spend one night back in Dhancho to accustom the body to low altitude.

Now you trek from Dhancho and reach Hadsar, and then from Hadsar reach Dharamshala via vehicle.

After reaching Dharamshala, if you want, you can roam around the nearby tourist places or else you can also return home directly from here. From Dharamshala, you will get direct bus services available to Punjab, Haryana and Delhi.

By the way, your Manimahesh Yatra can be completed in 06 days, but by taking 01 extra days together, you can complete your journey very comfortable

The helicopter leaves you to Gauri Kund after which you can reach Manimahesh by trekking 01 km. If you book an up-down journey ticket to Manimahesh then you have to pay Rs 8,600 / – from Bharmour and may have to spend up to Rs 14,500 / – from Chamba.

Tourists and pilgrims can visit Manimahesh at any time from April to November. From December to March, this place receives very heavy snowfall, due to which the lake is covered with thick sheets of snow. Devotees come here in large numbers to visit Manimahesh Lake from June to October.

How to reach Manimahesh By Flight

How to reach Manimahesh By Train

The nearest railway station to Manimahesh is the Pathan Kot railway station. Buses ply regularly from Pathankot to Dharamsala, Dalhousie and Chamba. If you want, you can reach these three cities very easily by cab and taxi from here.

How to reach Manimahesh By Road

Buses of Himachal Road Transport from Pathankot Bus Stand are available regularly for Dharamshala, Dalhousie and Chamba. From these three places, you will get a bus and public transport service to Bharmour.