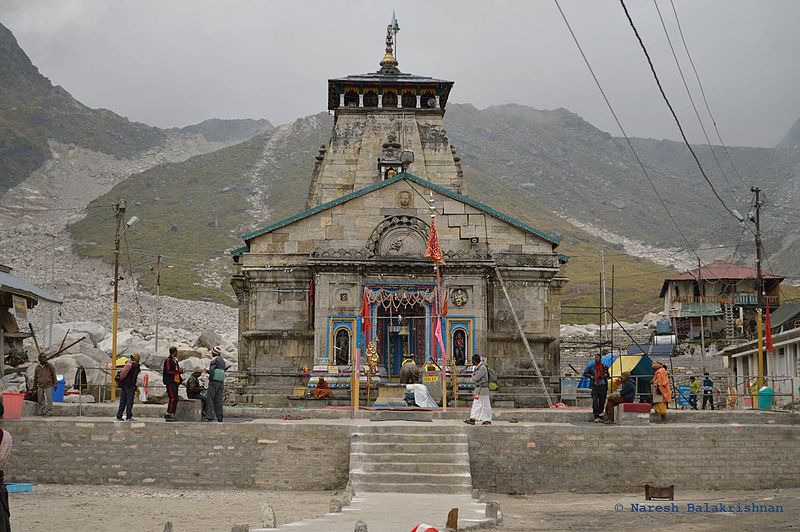 Kedarnath Temple located in the Rudraprayag district of Uttarakhand worshipped as the first Kedar in the Panchkedar temples (Kedarnath, Madhyameshwar, Tungnath, Rudranath and Kalpeshwar) of Lord Shiva, is also one of the twelve Jyotirlingas of Lord Shiva. Kedarnath is also part of the Char Dham Yatra in Uttarakhand.

In addition to Kedarnath in the Chardham Yatra, devotees also visit Gangotri, Yamunotri and Badrinath. Being situated at a very high altitude above sea level, the darshan of the Kedarnath temple remains closed during the winter season as many feet of snow accumulate here during the winter season, due to which it is considered almost impossible to reach the temple on foot.

The Kedarnath temple made of huge stones is built in the Katyuri style which is considered to be a very ancient architectural style. The Shiva lingam installed inside the temple is very ancient.

The history of the Kedarnath temple is associated with the time of Mahabharata, it is said that the temple was built by Janmejaya, a descendant of the Pandavas. After that Adi Guru Shankaracharya also got the work done for the renovation of this temple.

But there is clear evidence that this temple is being pilgrimaged by devotees for more than 1000 years. Rahul Sankrityayan in his books has assumed that the Kedarnath temple was built around the 12th to 13th century. According to Raja Bhoj Stuti, an ancient book kept in the museum of Gwalior city of Madhya Pradesh, the temple was constructed around 1076 to 1099 AD.

According to historian Dr Shiv Prasad Dabral, people who followed Shaivism before Adi Guru Shankaracharya used to visit Kedarnath. Overall, it becomes clear that the Kedarnath temple is more than 1000 years old, but there are differences among historians even today regarding its construction.

A gold urn has also been installed on the top of the temple. The temple courtyard is divided into three parts, which are called the Grabhgriha, Darshan Mandap and Sabha Mandap respectively. The ancient Shiva lingam of Lord Shiva is installed in the house, which is four cubits long and one and a half cubits wide.

Statues along with Draupadi of the five Pandavas are also installed in the home. Standing in the darshan pavilion, devotees can have darshan of Shivling and can also worship. Devotees can participate in the collective aarti of Lord Shiva by standing in the sabha mandap.

A huge statue of Nandi, the vehicle of Lord Shiva, has also been installed in the courtyard outside the temple. There are also many kunds in the back of the temple, in which devotees can also do Achman and Tarpan. There is still doubt about the temple when it was built, but most historians agree on the renovation work done by Adi Guru Shankaracharya.

Kedarnath Temple is the only temple of Lord Shiva that is also worshipped as Panchkedar, and also as Jyotirlinga. But the Kedarnath temple as a Jyotirlinga gets to hear a different legend and as a Panchkedar you get to hear a very different story.

However, according to both stories, it becomes clear why this ancient temple gets so much recognition.

According to the legend, many thousands of years ago, on the top of Mount Kedar in the Himalayas, two great sage Nar and Narayana, considered an incarnation of Lord Vishnu, did penance to please Lord Shiva. It is believed that both the great ascetics continued to do penance for Lord Shiva by standing on one leg without consuming food for several thousand years.

Lord Shiva was very pleased with the penance of Nar and Narayana and asked both sages to ask for anything as a blessing. Hearing this talk of Lord Shiva, both the sages requested Lord Shiva to bless him and establish one of his forms in this Kedarkhand forever for the welfare of his devotees.

Lord Shiva was even more pleased to hear this time of Nar and Narayan and he blessed both the sages and established his form as Jyotirlinga in Kedarkhand. Thus Kedarnath is worshipped as a Jyotirlinga of Lord Shiva. Kedarnath is also known as Kedareshwar-Jyotirlinga due to its location in the Himalayan Kedar

Kedarnath’s Panchakedar connected mythology is believed to be of the Mahabharata period. According to the legend, the Pandavas were victorious in the war of Mahabharata, but at the same time, the sin of the fraternity was also inflicted on them during the war.

At the suggestion of sage Vyasa, the Pandavas started making efforts to please Lord Shiva but Lord Shiva was so angry with the Pandavas that he disguised and went to Kashi.

The five Pandavas reached Kashi looking for Lord Shiva. As soon as Lord Shiva came to know that the Pandavas had reached Kashi after searching for him, he disappeared from there and kept quiet in the Kedarkhand in the Himalayas.

To prevent Lord Shiva from going elsewhere, Bhima took a huge form and spread his legs over the mountains. The other cattle came out from under Bhima’s foot, but despite being in the form of a bull, Lord Shiva was not ready to get under the foot of Bhima.

Recognizing Lord Shiva as the bull, Bhima tried to capture Lord Shiva. But Lord Shiva began to penetrate the land, on which Bhima grabbed the bull’s hump (back). When Bhima did this, Lord Shiva’s back remained in Kedarnath and four parts of his body appeared in four different places.

(Thus five different parts of Lord Shiva’s body began to be worshipped as Panch Kedar.) Finally, Lord Shiva was pleased with the devotion and strong will power of the Pandavas and blessed all the brothers to be freed from the sin of fratricide.

Apart from this, his stomach (navel) was revealed in Madhyamaheshwar, his arms appeared in Tungnath, his face appeared in Rudranath and lastly, his hair appeared in Kalpeshwar.

Kedarnath is the main religious place of India. Because this temple is the first worshiper among the five Kedar temples of Lord Shiva and is also one of the 12 Jyotirlingas of Lord Shiva, besides being part of the sacred Chota Char Dham Yatra of Uttarakhand.

Apart from this, this temple is seen most among all the temples of Lord Shiva. The fame of the temple can be gauged from the fact that lakhs of devotees come to visit Kedarnath every year. For travelling to Kedarnath in Rudraprayag district, you can go by car to Gaurikund. After Gaurikund, you have to walk 18 km to reach Kedarnath.

Darshan of Kedarnath is closed for devotees from November to April throughout the year. In these 06 months of the year, the palanquin of Kedarnath is taken to Omkareshwar in Ukhimath and the worship of Kedarnath goes to this temple many times till the opening of the doors of the temple.

As the summer season approaches, Kedarnath darshan is open to devotees for the next 06 months. But every year in October and November, the houses of Kedarnath are closed to the devotees for darshan.

The closing of the doors of the temple is announced every year on Bhai Dooj, which comes after Diwali.

The Shiva lingam of Lord Shiva installed in the temple is one of the twelve Jyotirlingas, due to this, ghee is applied after the Shivalinga is given a natural bath during the morning aarti in Kedarnath.

After that, the incense and lamp are lit. Aarti is performed for Shivalinga. During the morning aarti, devotees can enter the temple and participate in the aarti. But at the time of Sandhya Aarti, Lord Shiva is adorned, due to this, devotees can see God only from a distance.

The chief priest of the Kedarnath temple is a movable Brahmin from the city of Mysore in South India. Members of the same family have been worshipping Kedarnath for centuries. In Kedarnath, Lord Shiva is worshipped several times throughout the day, which is called by different names: –

Note – 01 If you want to get worshipped in the Kedarnath temple, then you can get the temple worshipped by depositing the fee prescribed by the temple committee. The fee for worshipping in the temple is changed from time to time.

02 If you are going to visit Kedarnath, then do visit Badrinath. A visit to Kedarnath is considered incomplete without visiting Badrinath.

How to reach Kedarnath

How to reach Kedarnath by Air

You will get regular air services from major cities of India to Jolly Airport of Dehradun. From Dehradun, one can easily reach Gaurikund by bus and taxi service. From Gaurikund you will have to trek to Kedarnath.

How to reach Kedarnath by train

How to reach Kedarnath by road

To reach Kedarnath by road, you can reach Haridwar, Rishikesh and Dehradun from any city. Regular bus and taxi services are available from these three cities to Kedarnath.