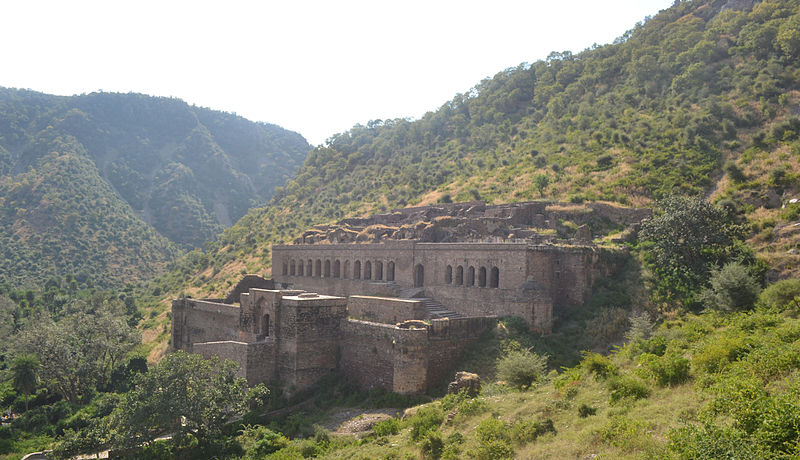 Bhangarh Fort located in Alwar district of Rajasthan was built by Jaipur ruler Mansingh I in the 17th century for his younger brother Madho Singh  I.  The fort was named Bhangarh Fort after Bhan Singh, the father of Madho Singh I.  There is a small village near Bhangarh Fort which has a population of 1300 and about 200 houses are built in this village.

The fort is secured and maintained by the Archaeological Survey Department of the Government of India.  At the time of the construction of the fort, Madhosingh I had the responsibility of the post of commander in Akbar’s army.  At that time there were about 10,000 people living in this fort, including Madhosingh’s army.  Bhangarh Fort is a huge fort built in the foothills of the Aravalli ranges.

Within the fort, there are ancient temples dedicated to Lord Shiva and Hanuman.  A very high wall has been built around the fort for protection from external invaders, and in addition, huge sandstones have been used in the construction of the fort.  Five entrances have been made to enter the fort.  Most of the fort has now been turned into ruins.

But when we enter the fort from the main gate of the fort, we see palaces, temples and Havelis built inside the fort.  Apart from the main gate, there are four more entrances for entering the fort, which is known as Ajmeri Gate, Delhi Gate, Lahori Gate and Phulbari Gate.  There are temples dedicated to many Hindu deities inside Bhangarh Fort such as Someshwar Temple, Mangaladevi Temple, Hanuman Temple, Gopinath Temple, Ganesh Temple and Naveen Temple.

The Gopinath Temple has been constructed using beautiful carvings on yellow stones on the 14 feet high platform in the fort.  A few Havelis and palaces are also built inside the fort, in which the “Nartaki Ka Mahal”, “Johari Bazaar” and “Royal Palace” are prominent.

Why Bhangarh Fort is famous

Bhangarh Fort in Alwar district of Rajasthan is not very famous due to its architecture or its history. It is believed that since the construction of this fort, some such incidents occurred here, due to which today this fort is considered one of the most cursed places in India. Now it is difficult to say how much truth is there in the incidents that happened here.

But one thing is true that at the entrance of this fort, the Archaeological Survey Department of the Government of India has written on the information board of the fort that the entrance to this fort from 06:00 am to 06:00 pm only can be done. Most of the palaces and Havelis located in Bhangarh Fort have now been converted into ruins.

These ruins help to make this fort a ghostly palace and also provide the basis for the ghostly stories associated with this fort. Bhangarh Fort, located close to Sariska National Park in Alwar district, is considered one of the most feared forts in India. The belief among the local residents is very strong that if any person stops in this fort at night, then that person’s body is not even found in the morning.

Due to this, even today, before the evening falls, all the tourists come out of this fort. Entering this fort is completely forbidden before the sun rises in Bhangarh Fort and after sunsets. By the way, many ghost stories are attached to Bhangarh Fort. But the ghost stories related to this fort construction and the royal family can be heard most from the local residents here.

By the way, many stories about Bhangarh Fort can be heard here. But the story related to the construction of the fort is most prevalent here. It is said that when Raja Madho Singh was starting the construction of this fort, he asked an ascetic Balanath, who did penance at this place, to get it constructed here.

As the shadow of the fort fell on his place of residence, the ascetic Balanath became very angry and cursed the fort of Bhangarh. Due to the curse of the ascetic, the Bhangarh Fort slowly turned into ruin and the ghosts resided in this fort.

At the same time, the princess arrested the tantric and gave him the death penalty. But that tantric cursed Bhangarh Fort before his death that henceforth no one will be able to stay in this fort. It is believed that the soul of that tantric still roams in the Bhangarh Fort.

Regarding this fort, I believe that the Archaeological Survey of India has banned the entry of this fort at night to avoid any kind of unpleasant incident. The rest depends on you how much you believe in the ghost stories associated with Bhangarh Fort.

By the way, you can go to see Bhangarh Fort throughout the year, but in Rajasthan, it is very hot from the month of April to July so this is not the right time to visit this fort. After the rainy season, the Bhangarh Fort at the foothills of the Aravalli Fort becomes even more beautiful.

How to reach Bhangarh Fort

How to reach Bhangarh Fort by Flight

How to reach Bhangarh Fort by Train

How to reach Bhangarh Fort by road

Bhangarh Fort is well connected by road. You can easily reach Bhangarh Fort from Alwar, Dausa and Jaipur cities of Rajasthan. From these three cities, you will get the bus, taxi and cab facility for Bhangarh.

If you want to come to Bhangarh from Delhi, then you can easily reach here by road. I will put the distance of these four cities below Bhangarh so that you do not have any problem in reaching Bhangarh.

Places to visit near Bhangarh Fort